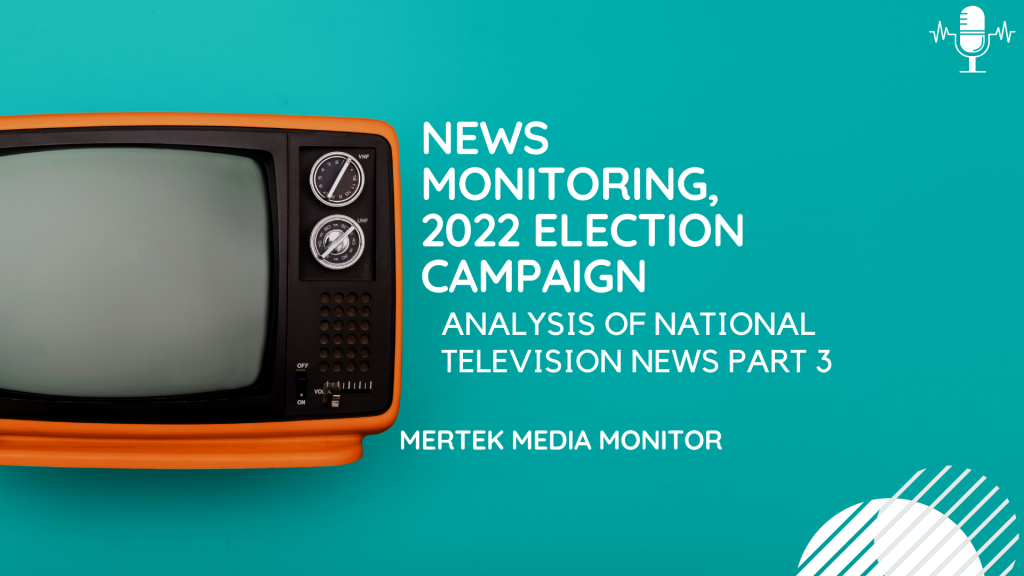 The fourth week of the campaign period has also concluded now. RTL’s news show is still the only one characterised by an effort to present various party platforms and to offer an objective and balanced coverage of the campaign. The public service television news show, which has been reduced to the role of a propaganda instrument, as well as the commercial channel TV2, which cooperates with the public service channel, continue to feature biased and essentially one-sided information. (12 February – 16 March 2022)

The most often cited outside sources by the public service television news show were the heavily pro-government outlets Origo, an online newspaper, and Magyar Nemzet, a political daily. According to a freedom of information request, in 2021 these two outlets led the field in the number of lawsuits they lost as a result of complaints alleging inaccurate or misleading reporting.[1] Another telling feature of the news shows broadcast by the public television channel Duna TV and by the commercial channel TV2 is that when they show opposition politicians speaking in person, they tend to use footage borrowed from ATV and the online television Partizán. The reason is that opposition politicians are practically never allowed to comment on the evening news of the public service channels or on TV2.

Another key insight is that even if they do not explicitly refer to or quote one another, there is a massive overlap between the Duna TV and TV2 news shows, as well as between the latter and the various online news sites affiliated with the pro-government side.

The opposition’s alleged desire to send arms to Ukraine – a stance attributed to the opposition by these channels even though it was never communicated by the latter, and was in fact strenuously denied by its representatives – was discussed in exhausting detail by these media outlets. Every day starting on 23 February, Duna TV and TV2 went on to cite the same two sentences from interviews in early February with Péter Márki-Zay on ATV and Partizán, respectively. And when we say “every day,” we mean that quite literally: in the span of 14 days, the two channels each used the same short clips 10 times.

A peculiar piece of reporting that harked back to this recurrent topic was featured on 11 March in the news shows of Duna TV and TV2. The item in question was presented with the subtitle “The left still wants to wage war.” Following a report by the pro-government online newspaper Origo, the two news channels “discovered” that day that the former Socialist Party politician Ferenc Juhász, who had previously served as defence minister, had opined in a talk show before the actual war began (on 22 February) – in other words 18 days (!) before this information was presented as news – that “The fundamental question is why we can’t actually supply ammunition if the situation so requires, since as a result of the expansion of our military capacities we have ammunition and weapons factories now.” This line was uttered in response to a statement which said that Ukraine’s ambassador to Hungary had submitted a list of specific items that the Ukrainians asked for, including ammunition – at a time when Hungary was sending ventilators to Ukraine. The former minister of defence answered his own rhetorical question in the very next sentence, arguing that the government and Viktor Orbán would not allow this to happen.

How the news shows covered the event at which the opposition movement United for Hungary presented its manifesto is also worth a separate discussion. On 10 March RTL used a distinct “Election 22” logo to accompany its 167-second-long item presenting the main promises of the opposition platform. The report featured a 34-second clip of the opposition’s candidate for prime minister, Péter Márki-Zay, talking. At the end of the item, the anchor also briefly summarised Fidesz’s position on the opposition’s platform.

TV2, by contrast, devoted a mere 29 seconds to the news, and the item was entitled Event unveiling the opposition platform ends in failure; the anchor was the only one talking in the entire segment. The report did not reveal anything about the platform of the United for Hungary movement, viewers were only told that in addition the audience, too, had been guided by a teleprompter on when to clap and that the event had started later than advertised.

In its news item entitled The platform presentation became chaotic, Duna TV focused for 224 seconds on the information that had been presented far more briefly on TV2. In its intro, the segment devoted 60 seconds to the announcement of the event and to discussing its alleged delay. This was followed by an exhausting report – as compared to TV2’s brief item on the issue – on how the opposition candidate had been unable to deliver his speech without hitches and how many teleprompters had been used to help him. It also stressed that on account of these machines not functioning properly, the audience, too, had sometimes applauded at the wrong moment. And to make sure that the actual event would not be covered, it used the final two minutes to refer to a quote from ATV, which revealed that Péter Márki-Zay would deliver another address on the state of Hungary in mid-March, as well as to present a collage of older quotes by the candidate (without an attribution of the sources), which the anchor accompanied with the comment that it had been revealed already earlier that the opposition was going to bring back the Gyurcsány-type of public healthcare (an ultimately withdrawn reform by the Gyurcsány government had required patients to contribute modest fees in return for using state healthcare services) and would eliminate the so-called 13th monthly pension benefit, the government’s freeze on utility prices and the minimum wage. At the end of the news segment they devoted 45 seconds to presenting Fidesz’s view of the opposition.

In our previous report we discussed the order in which the news topics were presented after the war was launched, how the coverage of the war had moved to the fore. By mid-March, the fundamental values of the news editors had begun to reassert themselves somewhat: tabloid news began to return and they were once again given substantial space in the news shows.

Although the war continued to be the most often covered issue, the number of items covering it has decreased. 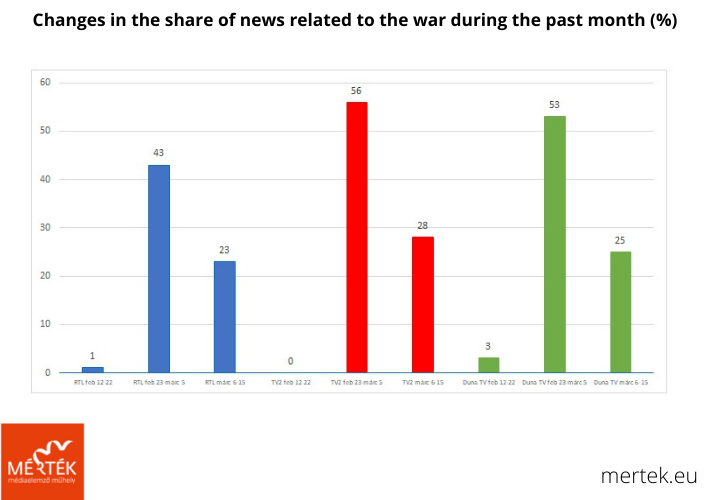 What has remained largely unchanged is the time various channels allot to politicians to comment in person. While RTL is essentially balanced in this respect, TV2 and Duna TV practically give opposition politicians no opportunities to speak in their news show. 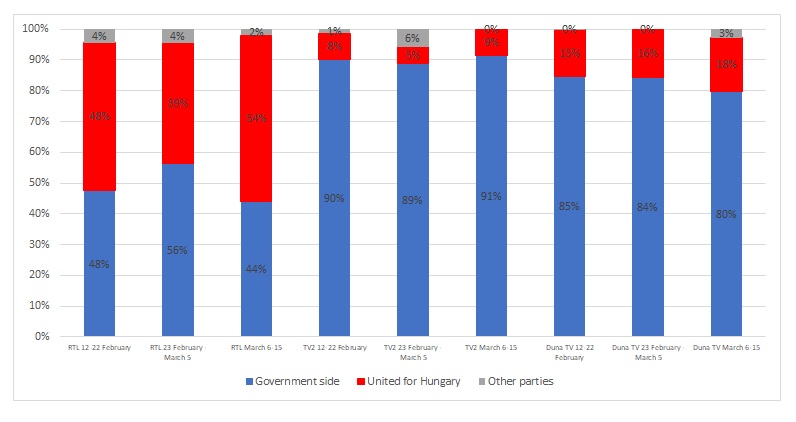 The context in which a given political party or movement is presented – whether this context conveys a positive or negative image to the viewers – also varies heavily by channel. While it is typical for RTL to present the various competing political groups in a positive context (giving them the opportunity to present what they want to do), TV2 always strikes a critical tone when covering the opposition, only presenting them in a negative light, as does Duna TV. 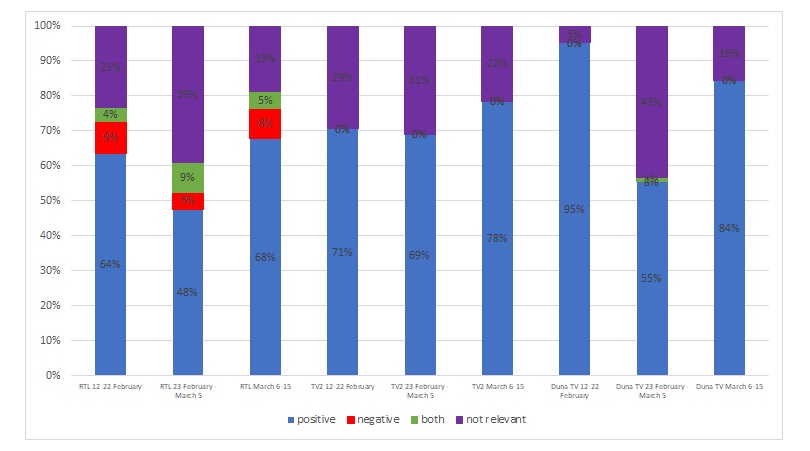 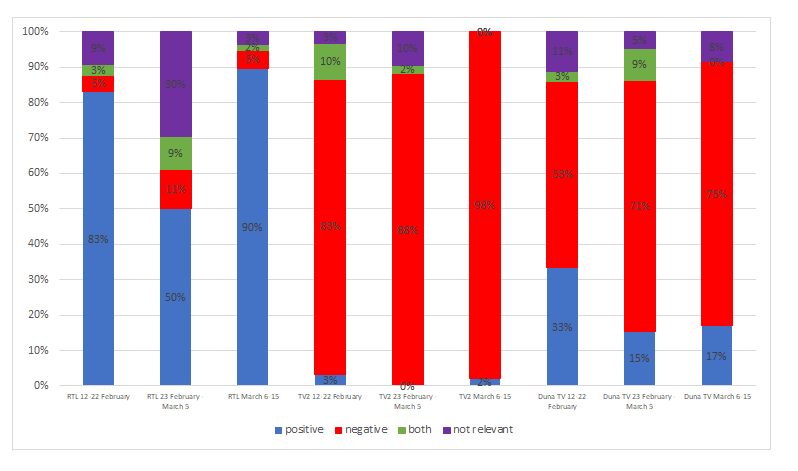 [2] The political news site Bennfentes (Insider) was founded by a staffer at Magyar Nemzet (a media outlet published by the pro-government Central European Press and Media Foundation) who had deceived portions of the Hungarian press with a fake story last year. https://media1.hu/2021/06/01/korabban-alhirt-terjesztett-most-bennfentes-neven-uj-oknyomozo-lapot-inditott-a-fideszes-mediaholding-munkatarsa/

The research is supported by the German Marshall Fund. 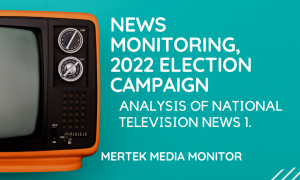 Through its analyses of the campaigns of the past few years, Mérték Media Monitor wishes to help individual voters and... 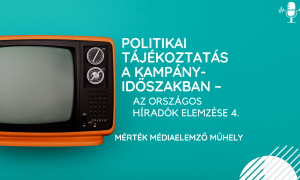 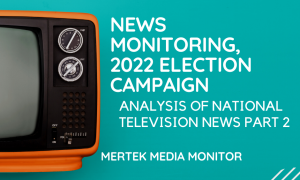 Numerous articles by journalists have looked at the Hungarian Television’s (that is the public service television channels) reports on the...